Firefox 2.x allows users to simply click-through their way to a site that uses an invalid certificate.  There is a warning of some sort, but who reads warnings anyway? (Internet Explorer is not much better in this respect, although at least its warning is very clear about not recommending the user to proceed.)

With Firefox 3.x, the situation is much better. First you get the same style of error response as you would for any other network problem: 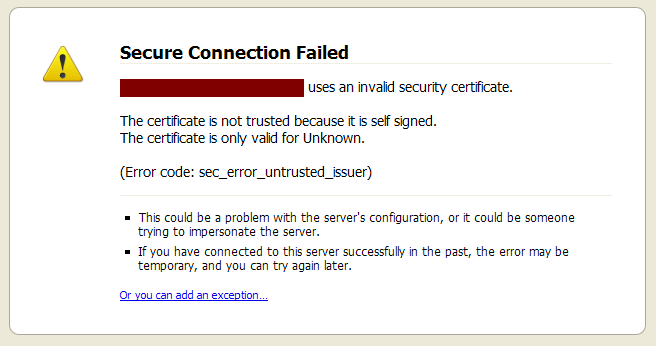 The beauty of this page is that it does not allow you to proceed to the site. To go through you have to create an exception, which is a multi-step process that you can start by clicking on that link at the bottom. You then get the following:

Another warning; very good. Clicking the Add Exception... button gives you the form that is used to actually create exceptions. There's a nice final warning on the top of the form, which will hopefully deter those who will be attempting to create an exception for the wrong reasons:

The changes represent a great step forward, and significantly reduce the likelihood of successful man-in-the-middle attacks. Still, I wouldn't mention exceptions at all on the error page: advanced users will find a way to do what they must, but normal users are better-off not knowing anything about exceptions.

Update (7 May 2008): My request to make hide the functionality to create exceptions from the error page was rejected. It's good to know that the issue was considered, even if the decision is not the one I would have made. Daniel Veditz pointed me to Johnath's blog post, which describes the history behind the new SSL error page. Very interesting.